Grandma "Nana" Scott came over a few days to spend time with Ethan and Bennett while I got to relax and crochet on the couch. I think they read this book about a dozen times! The love it! It actually is a book that I got from my friend Mags and Maria for the girls, but it has gotten plenty of miles already on it from the boys. Bennett really likes books and hold his attention a little longer than Ethan. I know that this will change a lot on us, but I predicted Bennett as the explorer and really we have seen Ethan taking on this role. He is out and about independently playing a lot more than Bennett. Bennett is a little more of a cuddlier, but really they both love to be picked up and with people. 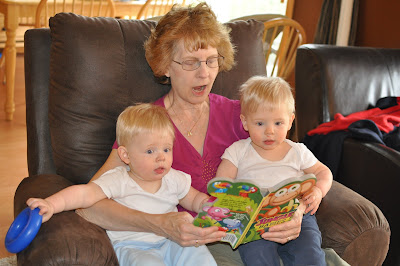 In addition to reading books, they also played with a toy that Nana had given them for their first birthday. They really like it. It has kind of been hidden on the back of the toy shelf due to its complexity, but more recently Nanny Molly started playing with it and so we started keeping it on the lower shelf. They don't understand the shapes, but know that the pieces go inside the box through the holes. They chew on the pieces, but that day that Sandy was there they played almost an hour with this toy. The other funny part is that the next morning I came downstairs and this is what I saw. Bennett sitting behind the couch by himself playing again with the shape box. I had to get a picture so Sandy knows how much they like their present. 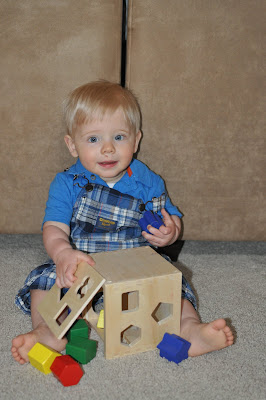 So I wouldn't call myself a tree hugger, but I do like to be a little earth conscious. For example, I don't use plastic bags at stores. If I forget my reusable ones in the car, I am the person that stuffs as much that fits in my purse and struggles carrying out the rest to the parking lot. I have converted to natural cleaning products made from plants like Seventh Generation and Method. I recycle as much as I can. One of the things that was killing me was children's toys. All this plastic was coming into my house. Granted we inherited most of the toys and a lot of them were even used prior to their cousins, but I just couldn't fathom what would happen to these toys after they broke or it was their expiration. Then it became clear....wood! Why don't they make more toys from wood? Good news is that there are a lot of companies out there that make wood toys. They don't light up or make sounds, but do have lots of learning components. Down side is that they are more expensive, but they last longer so they are worth it. If you are interested in some of the ones we have, they are made by a company called Melissa and Doug. That is who the shape box is by. Check them out!
Posted by MJ Lamon at 12:12 PM

I love Melissa and Doug!! I buy it whenever I can. I actually used to buy that line when I worked for Macy's. Love the vendor so I support them whenever I can, glad you do to!! They are great toys. Sorry you have to wait another week to deliver but happy that you and the girls are doing so well. Hang in there!!